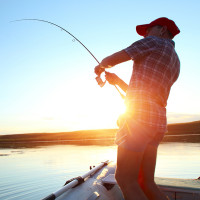 Jun 24, 2015 - Late summer often translates to lazy. Well, if not lazy, then let's just say it brings out a desire to kick back and ride out the heat.

For Summer, A Cautionary Tale About Boat Safety

May 28, 2015 - As summer settles in, people flock to the water and boats will be seen on bodies of water across the U.S. Fishing and water sports are part of the cultural fabric of our home state of Arkansas, and we're proud to be a part of fun, safe recreational activities on the water.

May 28, 2015 - Somewhere in North America, there's a body of water and there's somebody fishing it. From the Pacific Northwest to the Florida Keys, the water and the fish may change but the sport remains the same. Summer, of course, sees more bodies on the water, and Outdoor Life has this guide to the best summer fishing spots in North America.

Apr 24, 2015 - Death, taxes and spring storms….each very much a certain thing. (Our caps are tipped to Daniel Defoe, the 17th century English author.) Spring is a turbulent season, indeed, and for those longing to get back out on the water, spring storms don't have to be a hindrance.

'Dude, You Killed a Duck with Your Face'

Apr 6, 2015 - It actually happened, as chronicled here by James Overstreet at Bassmaster. Overstreet, like War Eagle, is an Arkansas native and in a recent post for Bassmaster, he recounted a 2009 incident on Lake Amistad in west Texas in which a buddy of his quite literally killed a duck with his face while racing across the open water.

Jan 29, 2015 - Winter doesn’t mean you have to pack up your fishing gear or, gasp, cover your War Eagle boat for the season. As Field & Stream points out, winter can mean a fishing bonanza. You just have to know where to go.

Dec 12, 2014 - Christmas is a time for family, friends and most importantly, faith. But it's also a time for stories. Here's an excerpt of a good Christmas fishing story from FishingStories.net called...

Thanksgiving Traditions from the Pros

Nov 10, 2014 - November is known for many things; fishing is not primary among them. The month most associated with fall, of course, conjures images of Thanksgiving (with maybe some deer hunting and football thrown in for good measure.)

Oct 13, 2014 - There's fishing yet to be done this season, but it's always a good time to be thinking about boat maintenance.

Aug 15, 2014 - August is that time of year when summer decides, in the words of Def Leppard, that it's better to burn out than fade away.